Quotes of Students and Colleagues

This is where students and colleagues share their thoughts about the unique exchange they have with Tim as an educator. Add your quote today! 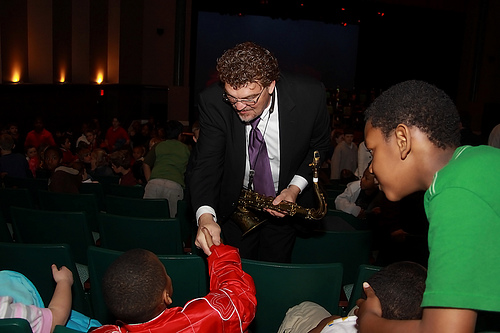 My name is Jermaine Smalls I studied improvisation techniques on saxophone with Mr. Gordon. Since studying under him I have become more proficient in my improvisation skills. Being able to hear a line in my head and play it or transcribing a solo and using it as a teaching aid for myself. Today I am a musician in the U.S. Navy, the techniques which he has taught me have allowed me to grow more as a musician and also teach others. Thank You Tim Gordon.

Tim Gordon is the epitome of an effective mentor. He is an incredible teacher that is capable of teaching anything from basic music fundamentals to the in-depth and intricate side of music. He is able to do this in such a way that the student is able to understand it, so they can be successful in accomplishing their musical goals. However, the most important quality that Mr. Gordon possesses is the way he truly cares about his students and wants to see them succeed in life as well as in their musical endeavours.

I began studying saxophone with Tim Gordon as a novice freshman in high school. During my three years working with Tim he helped me to dramatically transform my playing, and he significantly impacted me as a person. If you are serious about learning to play the saxophone or how to improvise, studying with Tim Gordon is one of the best choices you can make!

Tim is a superb musician and teacher, but more importantly a thoughtful and dedicated person who cares deeply about his students. Tim always generously shares insightful musical knowledge with his students and fully supports their endeavors to make music.

Tim brings a vast range of musical experiences to the table in both the jazz and classical genres that make him one of the top saxophone teachers anywhere. Tim’s students have consistently placed high in numerous jazz and band competitions at the national, state, and regional levels, and his high school students have gone on to excel at leading universities around the country.

I really can’t say enough great things about Tim! I consider myself very lucky to know and to have been taught by Tim Gordon.

Tim, I love your new website and enjoyed listening to your sound files. I think it has a Yellowjackets kind of vibe. Great work from a great teacher and sax player! Hope to see you soon.

Tim has an impressive biography, performing with many national and international artists, but the truly impressive feat is he is a wonderful teacher as well. He understands so much about the saxophone and the other woodwinds. His ears can pick up any opportunity for improvement in another's playing—he is a wonderful diagnostician—and he can set the student on a plan for marked improvement. It's easy to give Tim my highest recommendation as a performer and teacher. ~ Mark Catoe

I know I am only a bass player, but I know about sax players. At the University of Miami, I played a lot with three of my favorites, Joel McNeely, Ed Calle, and Doug Moffet. In the professional world, I played and recorded with Bill Evans, and produced and played with Boots Randolph for 13 years. I know sax players. Tim Gordon and I started making music together in the mid 80's. I knew the first time I heard Tim that there was something incredibly special there. When my brother and I expanded our band to include sax, Tim was not the first call--he was the only call. As we became close friends and musical brothers, I realized that as great a musician as Tim is, he is an even better human being. But for the music--it took me a long time to be able to put a finger on what I loved so much about Tim's sax playing. It really comes down to 3 sax players. David Sanborn always knocked me out. While he was never going to be the NY jazz scene hero playing abstract art, Sanborn showed everyone how a "soul" player can evolve into a commercial success. His tone became the gold standard. His writing has always been incredibly catchy, and his rhythm sections have been world class. There is a lot of Sanborn in Tim Gordon. Michael Brecker always knocked me out. His jazz playing took the horn to a new and different place, much like Coltrane had done after bebop. Brecker's energy was endless. His lines and sounds came out of nowhere and changed the way the horn is played and studied. There is a lot of Brecker in Tim Gordon. Boots Randolph totally knocked me out. I stood behind the man on stage for 13 years--he being 30 years my senior--and he never let me down for a single measure. His sound was brilliant. His time was flawless. He could swing like the best ever, yet he invented and perfected what it meant to play a sax solo behind a pop vocalist. Most of all, Boots could interpret a melody better than anyone--anyone! So can Tim Gordon. Tim embodies the best of my favorite sax players in the world. His writing is inventive and soulful. His playing is absolutely world class. His tone is enviable. I have introduced Tim to the top horn players in Nashville, as well as Bill Evans and Boots Randolph. They all love and respect him. I want to make music with him as long as I am making music.....Tim is the best!

This group does not have any discussions yet.

You need to be a member of Quotes of Students and Colleagues to add comments!